Henry Hooper Blood ran for governor after being nominated by the Democrats in 1932. He defeated his Republican opponent, William W. Seegmiller and became the seventh governor of the state of Utah. He served two terms from 1933 to 1941. He took office during an extremely trying time in U. S. and Utah history at the height of the Depression. The Depression hit Utah harshly leaving it foundering as one of the top states for citizens on relief. Utah was in desperate need with more than one-third of Utahns suffering from unemployment.

The situation heightened in 1934 when Utah recorded its worst drought in history. Left without food, clothing, shelter, and employment many of Utah's families struggled to secure their basic needs.

". . . my husband (Mr. DeFriez) worked 8 days on the cemetery (weeding it) and earnt the $ 16.00 we got from the government through the Relief Society. We cannot ask them for more, they havent any money. $125.00 is all this town got in Dec. and they had to divide it all around and we got our share. We could not ask for more, I would be ashamed and also would not want to ask the people of Price, they would think I had nerve and laugh at us. Please (Governor) don't say anything to either of them, we would be ashamed, we don't wish more than our share from them."

Hundreds of letters resembling this one crossed Governor Blood's desk each day. Mrs. DeFriez was living with her family in a decrepit, abandoned building and needed quilts for her family to stay warm. Mrs. DeFriez's circumstances were better than those of countless authors of these letters; many had no shelter at all. Countless families on relief survived on an average of $15 per month, usually less. These letters can be found in Governor Blood's general correspondence (series 186) and Relief programs (series 191). In responding to each of these letters, Governor Blood expressed his desire to give aid while revealing his helpless state.

Governor Blood began the long journey to economic recovery by instituting new programs, decreasing the wages of state employees and slashing the size of state departments: for instance juvenile judges also became probation officers. He also closely followed and supported President Roosevelt's New Deal. Programs like the Public Works Administration, Civilian Conservation Corps, Home Owners Loan Association, National Recovery Administration and other federal programs found their way and support in Utah. Many irrigation and reclamation projects as well as public buildings were a result of these programs, which not only provided employment but relief for future problems [e.g., Deer Creek Reservoir and irrigation (series 189)]. Blood pushed and gained support from a resisting legislature for a 2% sales tax to secure federal funds for these projects.

Along with the customary tasks of a governor, many other notable occurrences happened during Blood's governorship: Utah becoming the 36th state to ratify the 21st amendment ending prohibition, the institution of the direct primary election law and preparation for World War II. In 1939 he vetoed proposals for junior colleges in Richfield and Roosevelt as well as low-income housing while cautioning about the expense.

Relief from the devastating effects of the Depression occupied Governor Blood's terms. He fought conservatively but with great determination for Utah's citizens as shown by his two trips to Washington in his first year as governor. He was a fiscally conservative man of steady, circumspect plans. He held political power that few governors have. He was trusted as shown by the dominion given him. The public did not consider him an adventurous hero but undisputably as a man who had great concern for this state. 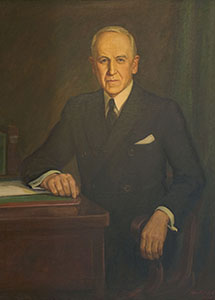 Portrait by Gordon Nicholson Cope from the Utah State Capitol